I was at a party the other night meeting new people and a common question I got asked was “tell me something interesting about you, something that will make you stand out”.  This always fascinates me because me being me, I have a laundry list of weird things on my “about me” checklist.

That night I decided to share the fact that I’ve picked up boxing with the intention of getting in the ring next year.  The reaction I expected?

Yes, because I’m devoting my time and energy for over a year to do this: 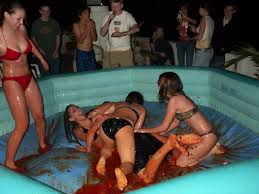 I am the farthest thing from a super feminist but I sincerely doubt that if it was two guys talking at a party… well firstly, one guy wouldn’t ask another guy that question.  But secondly, if the guy responded with boxing, I’m positive he didn’t picture a bunch of guys in a blow-up pool fighting in jello.

A few days after the party, I went to class and my boxing mates asked how the party went so I told some stories then took out my phone to share some pictures from the night.  I showed them this:

Consistent reaction from the guys at boxing was… “Wow, you’re actually, really pretty.”  Now if I hadn’t endured the feedback at the party the previous weekend, maybe I could have taken this feedback as a compliment.  But the only word I heard in that sentence was “actually”.

I talked to Steve that night and he gave some good advice like… You don’t go to boxing to look good, you go to train.  Or… if you wear makeup to boxing it’ll just smudge from the sweat.  He’s right about those things.  But this isn’t about looking pretty, it’s about feeling feminine.  The best quote from Steve that night was:

“Shannon, you chose a sport where you punch people.  What do you expect?”

What do I expect?

The thing I am trying to focus on is that I’m not, nor will I ever be, one of the guys at the club.  I was reminded of that tonight as I got punched in the tit.  It was actually pretty funny… thank god it was lefty.

What else happened this week?  There was a commercial shooting at the club so we had classes at the Pipe Shop in the Quay which was super cool:

And oddly enough the one thing that’s crazy improved has been my skipping.  Thank god I’m having something technical go my way because it’s certainly not my hook yet! I filmed a couple of my tricks:  https://www.youtube.com/watch?v=ETO4sCMQh2U

I can go for minutes and minutes without screwing up on the rope and I can do 7 types of footwork: Regular, split feet, one foot, jumping jacks, heels, high knees and kick backs.  Makes you wonder how something you used to dread magically improves.  Side note if you think doing all those types of footwork for minutes at a time are easy, pick a jump rope and call me 😉

What’s up for this next week?

10 classes of yellow down, 26 to go until I’m eligible to test for green.

My left hand and wrist are still struggling quite a bit and it’s tough to give it rest time to heal so I’m focusing a lot on technique and slowing down the power.

Next Saturday is the Griffin’s Fight Night so Kiersten and I are heading there for a mini girls night and I’m super stoked to see my first live amateur fight.  I’ll definitely have tons of pics for my next post.